This post discusses the 2018 update to COP (Code of Practice) 24 concerning the requirement for Commercial LPG Appliances, including BBQs, to have a Flame Supervision (Failure) Device installed.

It is now not permissible for your Gas Safe catering engineer to issue a Gas Safety Certificate for appliances without a Flame Supervision Device. However, they can make out a Gas Safety Inspection Report. This report may include the condition of the appliance and takes into consideration the environment in which the appliance will be used. 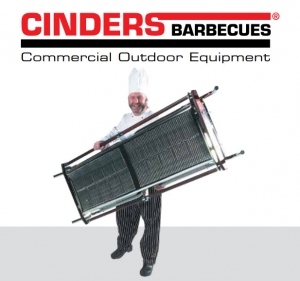 Cinders Barbecues Ltd, the market leader in commercial LP Gas Barbecues, have been proactive in their approach to the change – they even participated with UKLPG in the preparation of the change to the code of practice.

While their existing units can’t be retrofitted with a Flame Supervision Device they can still be used providing the environment in which they are used meets the specification of Section 2.2 of the Code which says that a single appliance supplied by a single cylinder does not need a Flame Supervision Device if the gazebo (build-up, gazebo, marquee, tent, stall or other temporary structure) has one long side completely open and there is a 150mm (6 inch) gap to ground around the other three.

Cinders have launched a new range of barbecues which are fitted with the Flame Supervision Devices and meet the needs of the owners, operators and the venues/festivals. Because some operators, and some venues/festivals, are applying the regulations broadly The range are the ‘FESTIVAL‘ models. The existing range will be rebranded as ‘CLASSIC’. ‘CLASSIC’ models are certified to BS EN 498:2012 (Barbecues for Outdoor Use) and cannot be retrofitted with FSD’s without substantial changes which would breach their CE Approved design.

This site uses cookies. By continuing to browse the site, you are agreeing to our use of cookies.

We may request cookies to be set on your device. We use cookies to let us know when you visit our websites, how you interact with us, to enrich your user experience, and to customize your relationship with our website.

Click on the different category headings to find out more. You can also change some of your preferences. Note that blocking some types of cookies may impact your experience on our websites and the services we are able to offer.

These cookies are strictly necessary to provide you with services available through our website and to use some of its features.

Because these cookies are strictly necessary to deliver the website, refuseing them will have impact how our site functions. You always can block or delete cookies by changing your browser settings and force blocking all cookies on this website. But this will always prompt you to accept/refuse cookies when revisiting our site.

We fully respect if you want to refuse cookies but to avoid asking you again and again kindly allow us to store a cookie for that. You are free to opt out any time or opt in for other cookies to get a better experience. If you refuse cookies we will remove all set cookies in our domain.

We provide you with a list of stored cookies on your computer in our domain so you can check what we stored. Due to security reasons we are not able to show or modify cookies from other domains. You can check these in your browser security settings.

These cookies collect information that is used either in aggregate form to help us understand how our website is being used or how effective our marketing campaigns are, or to help us customize our website and application for you in order to enhance your experience.

If you do not want that we track your visit to our site you can disable tracking in your browser here:

We also use different external services like Google Webfonts, Google Maps, and external Video providers. Since these providers may collect personal data like your IP address we allow you to block them here. Please be aware that this might heavily reduce the functionality and appearance of our site. Changes will take effect once you reload the page.

The following cookies are also needed - You can choose if you want to allow them: